You Feel Like You've Got the World On Your Shoulders? Pray to St Christopher

My mother gave me a St. Christopher medal in hope of keeping me from harm when I first got my driver's license .  It worked because I made it safely through lots of fast driving on deer-riddled country roads with no seat belts and carloads of friends.  I wore that medal all through high school and college.  It now resides in a special place with all the other meaningful saint medals I have collected or  been given over the years.  Even now I occasionally bring it out as a reminder of how my mother's unwavering faith seemed to come so easily to her.

As one of the most recognized symbols of sainthood, St. Christopher medals are worn by Catholics and non-Catholics alike.  Most of us know St. Christopher is the Patron of Travelers,  safe journeys and of transportation workers. The story goes that he was a big strong guy looking for a way to be of meaningful service after he converted to Christianity.  Having a strong back and a wooden staff, he decided to serve God by carrying people across a treacherous  river where many had perished in the past.  Sort of a personalized ferry service.  It is thought that much of the story is simply a legend and not based of historical facts which is why his sainthood has been in question.  I'm not really bothered by that because I love the message regardless of the factual details.

As legend tells us, it had been a long busy day and Christopher was very tired when he was asked to carry a small child across the river.  He figured it was an easy way to end his day.  As he began his treacherous journey he realized the child on his back was much heavier than he had appeared.  He struggled under the weight and went slowly and carefully not wanting to stumble.  The burden of the child became heavier and heavier, like no one else he had ever carried. The river became swollen and the current raged.  He felt that he had the weight of the world on his shoulders but finally exhausted, he made it to the opposite bank with his passenger unharmed.   He said, "I do not believe the whole world could be as heavy on my shoulders as you were."  The child replied "You had on your shoulders not only the whole world but He who made it." To prove his revelation, he told Christopher to plant his staff in the ground and it would flourish.  The child then vanished.  The next day the stick sprouted leaves.

As I cared for my aging mother,  I worried for her safe journey into the next world just as she worried about me as a teenager when she gave me that St. Christopher medal.  When you care for someone who can't care for themselves, you become an extension of that person, living two lives in one.  The weight of her world rested firmly on my shoulders.  Not a moment went by that I didn't feel the burden of carrying someone who was unable to carry themselves, protecting her every step of the way.  I was honored to do it but I felt more and more overwhelmed as the months turned into years.  I felt the heaviness of the burden grow.  I felt the river rise and the current become a torrent until I thought my back and mind would break.  It felt that if I made one misstep, I would drown and so would my mother.

Caring for my elderly mother was like traveling in the dark, on an unfamiliar dirt road, in a car I'd never driven before, with an empty gas tank, no cell phone signal, the bridge out, having forgotten my glasses and not really knowing if I would recognize my destination when I got there anyway.  Even a saint would have a hard time finding their way.  I was brought to my knees daily.  I was unsure of the journey and unsure of the destination. That was when I took that St. Christopher medal out of my jewelry box and held it tightly in my fist and prayed that he still enough strength left to help me. 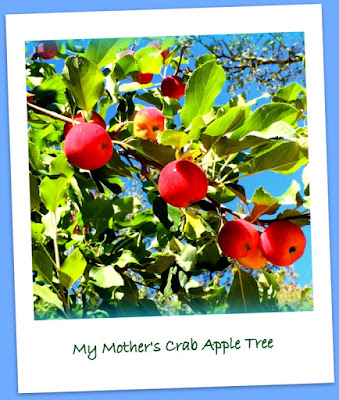 St. Christopher is not only known as the saint to pray to for safe travels but when you ask him to intervene on your behalf, he willingly shoulders the burden for you.  St. Christopher is the one to whom you hand over your worries, your confusion and your fear, freeing you to travel safely forward.  He can block the rising waters and stave off the raging current and protect you if you stumble.  He can hold the weight of your world on  his shoulders, easing your weary load. I marvel at my mother's insight when she gave me that St. Christopher medal.  She must have known that I would need his help. All I had to do was ask but I still wonder about the stick she planted in her vegetable garden that turned into a beautiful crab apple tree.