Witnessing the Crucifixion While Restoring the Corpus...... From the Diary of The Saint Painter Over a year ago I was asked to restore the statues for the new church being built to replace the childhood church of my youth. I was thrilled for the chance to work on statues of this magnitude. They were extremely old and damaged but beautifully designed Italian statues, taller then me. The idea of transforming them to their original splendor was something I was eager to do but I didn't know that in peeling off their damaged layers I would be transforming myself, as well.

I was going to be working on at least four statues large enough to look me in the eye.  I needed to get them settled and get to work. They arrived one by one in the back of my SUV.  I carefully evaluated each and made a plan. St. Anne with Child Mary had taken at least one header sometime in their 90 plus years and both needed a nose job and lip reconstruction. Child Mary, like many kids had bumped her chin leaving a gash big enough to warrant a trip to the ER.  The many layers of chipped and flaking paint would have to be painstakingly dissolved before I could even consider repairs or new paint. 70 year old St. Anthony had some missing fingers and a poorly healed broken wrist. The Child he held had large decomposed areas, water-damage and poorly matched but well intended touch up paint that resembled roofing tar. It all had to be removed while salvaging as much of the original finish as possible. The 88 year old St. Therese statue still had her beautiful face but chips and discoloration left her with an unpleasant complexion. She was starting to show her age. The broken edges, peeling paint and sporadic gold leaf on her robe told me her outfit needed updating. The statue I avoided was the Sacred Heart of Jesus. He came to me having been repainted in an unusual pearlized color and I knew Father Bill wanted traditional colors. It was apparent that Jesus had taken a few tumbles using his arms to break his fall. Instead the falls had broken his arms. Some brave soul had made difficult major repairs to reattach his out-reaching arms. Now the repairs needed repairs. With broken fingers, wobbly arms, plastic peeling paint and a heart that needed mending, I wasn't ready to think about the monumental task of resurrecting the Sacred Heart of Jesus statue. Off he went to the back corner and patiently watched over us. 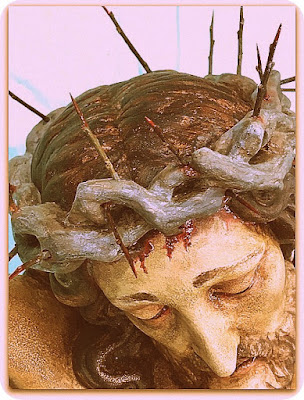 "Oh, did I mention that our two large Corpus statues need to be painted? One is for the crucifix behind the main altar. The other is for the crucifix in the small chapel. I would like them to be painted realistically, instead of the current wood finish. They need to be done first."  No, actually, Father Bill, that wasn't mentioned but what the hell...might as well be trial by fire right from the start, I thought as I smiled back, nodding. I didn't bother to tell him I had never painted a Corpus statue realistically, not because I am not skilled enough as an artist but because I am not skilled enough spiritually to face Christ's agony. I didn't even like saying the word Corpus out loud. I have purposely avoided the discomfort. I shook my head as I heard my mother's voice "You get the lesson you most need when you need it most."  So, I loaded the two of them into the back of my SUV for a road trip to their new accommodations.  Surprisingly, no one called shotgun. 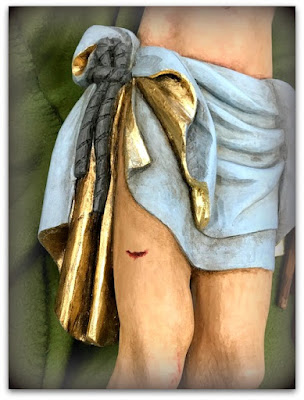 I started with what I had been trained to do... preparing the ground, repairing the broken parts, re-sculpting the missing pieces. I mixed hide glue with gypsum to create gesso that was close to what had been used 90 years before. It fills the imperfections and prepares the piece to accept the painted finish. I used natural bristle brushes like those traditionally used. Gradually, the two Corpus statues transformed into a smooth paint-ready surface. As each layer dried, I mixed 10 colors of flesh tone, 6 colors of blue for the robe and 4 colors of cream for highlighting and more colors for the beard and hair. I waited for drying time then viewed each under a variety of light. I labeled, remixed again and again until I was satisfied I had exactly the right colors. My next challenge was to put life into the Corpus statues or in this case, life and death.


I held the statue of the body of Christ in my lap falling into a trance as I carefully painted the flesh tone around the five wounds associated with the Crucifixion. I could feel the pain they must have caused. In the process of glazing and layering shadows and highlights on arms and legs, torsos, cheeks and chins, the face and body transformed as my skills as an artist were surpassed by my emotions. I began to see in a different way. I was overwhelmed by the thought of being nailed to a cross as if an animal. Tiny cracks in my heart opened with each brush stroke as I painted the details of the eyes and the mouth.  I envisioned how excruciating the torture must have felt and what it took to endure it.  I felt the wind and heard the murmur of a crowd. How quickly would Christ's tears evaporate and the blood from the Crown of Thorns dry in the breeze?  I felt a chill as the clouds passed in front of the sun. I had let go of  protecting myself from the "reality" of  the Crucifixion.  It had always been easier to deny living in a world where someone, not just Christ, but anyone could be crucified for what they believed. Exhausted by the painting, I had to step away frequently.  Each time I returned as an artist but now I was an artist who was seeing through her heart.