The Sacred Heart of Jesus. The Patron Saint of Obedience...... Lessons Learned Restoring the Statue

When the restoration of the church statues  began, I found I loved coming into my studio more than ever, saying good morning to the 6 vintage Saints that were waiting for me. I imagined what each one said in return. When I misplaced a tool, St.  Anthony, Patron Saint of Lost Items, was quick to intercede. The child in his arms seemed happy to hold whatever was most important to me. Their beauty hit me hard every time I looked at them.

On the long days when nothing seemed to get done, I would ask St. Therese to help me to be thankful for the small things I accomplished with good intention and not to be overwhelmed by the big unfinished tasks that lay in front of me. The St. Anne statue was getting the most attention because every speck of paint had to be dissolved gently and carefully before she could don a new outfit.  Patience reigned and no one complained.  I would move from one to the other, waiting for a repair to dry while I sanded and sculpted a finger for another then moved on to wash St. Therese's face with a soft cloth and cleanser as the gold leaf edge on a robe dried.

Several months of hard work had passed and Father Bill asked to visit my studio.  It was kind of fun to have a priest visit my paint room. All sorts of antics came to mind but he's young and I'm old. Who's the adult here?  I didn't need to upgrade my ticket to Purgatory.  I was well on my way already. He seemed genuinely interested in the progress. I was curious how he had so masterfully mobilized support in a community that didn't know they needed a new church. He told me he found people willing to let go of their personal issues and support a bigger purpose. It was a nice chat and then he dished the dirt. He said "Personally, I don't have trouble with the things you might think like the vow of poverty or chastity. It's the obedience part I struggle with."  I filed that morsel away in the recesses of my ADD brain thinking 'Interesting but what's obedience got to do with ME?'

Weeks later, all of the other saint statues had been completed.  It was time to face the Sacred Heart of Jesus statue I had avoided. One morning I came into the studio greeted by my very excited assistant, who had spent the entire night tediously removing the old paint, uncovered something totally unexpected. The original finish on the Sacred Heart of Jesus statue wasn't what I thought it had been at all. Instead, a highly detailed gold leaf over cream robe revealed itself. The statue was much older than I had thought. She traced the design, then like an archeologist, filled in the missing parts of the border so I could duplicate the pattern during restoration. She had unearthed pieces of the original finish hidden from view for years. As an artist, it's beauty took my breath away. I saw clearly what the Italian sculptor had worked so hard to achieve. The folds on the robe created a flow of gold that drew your eyes to the most important part... the Sacred Heart of Jesus and his outreaching arms.  Even though the subliminal artistry was immaculate, the colors weren't the traditional ones Father Bill and I had agreed on. As an artist, I was torn by the need to restore the statue to the sculptor's original intent and Father Bill's wish for tradition. So of course, using current tradition, I texted Father Bill to visit.

He took his time looking at the artistic beauty. We talked abstractly about the liturgy of the church versus the art of the church. I explained my surprise at what I had uncovered and how I saw the intent of the artist. He asked me to wait while he thought about the colors. I continued my own research thinking I could convince him of the need to stay true to the history of the art. Instead, I started to see the deeper meaning of the crimson robe of the Sacred Heart of Jesus statue. Not once did Father Bill insist on how I did my job. He left me believing he would get back to me with his answer. I found the answer early one morning several days later while having coffee with the Sacred Heart of Jesus statue. He looked me in the eye and said "I'm fine wearing a red robe.  It's not about you.  Let it go."

Again, I texted Father Bill. "The Sacred Heart of Jesus statue gave me permission to be painted as you wished". Realizing I had just experienced a lesson in obedience, I added "Thank You".  He replied "Obedience creates humility".  I choked silently as I humbly ate my words. 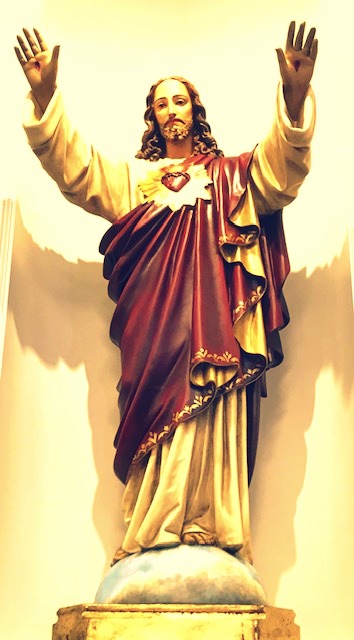 The Sacred Heart of Jesus statue was about 64 inches tall and his precariously attached arms were outstretched with palms open. I intensely focused for hours repairing broken hands and arms, wanting this statue to exemplify the deepest meaning of the Sacred Heart of Jesus. As I filled, sanded and painted, all while stabilizing his out-reaching arms, his palms were exactly the same height as a certain part of my anatomy. I didn't seem to have enough hands and he seemed to have too many. My chest needed to be in the same spot as his hands much of the time. It took such intense concentration to work on the statue that his hand placement was rarely noticed until after a long day of work when I found myself conversing with Him as if He were actually present. Apparently, He was. I gained an understanding of "my cup runnith over" and "forgive us our trespasses as we forgive those who trespass against us". It was all good between the two of us.

I had thought obedience was listening to someone's words and doing what they told me to do. After all, I came of age in the era of feminist enlightenment where obedience was a four letter word. I realized now it's actually about listening with intent. Often, it is the silence between words where true meaning is found. I hadn't thought I needed to learn about obedience or humility but like cutting a steak with a scalpel, it may not be necessary but it's profoundly effective once you experience it. Who knew? Father Bill and The Sacred Heart of Jesus knew exactly what lesson I needed.